On July 12, Nothing Phone (1) will make its debut. However, given that most of the phone's specifications have been revealed online, there isn't much mystery left regarding it. The Snapdragon 778+ Processor has recently been confirmed by Carl Pei, a co-founder of Nothing. Today, a reliable tipster is here with what seems to be the smartphone's specs sheet. Let's examine the information that is available.

Tipster Abhishek Yadav has leaked key specifications of Nothing Phone (1) on Twitter. The tipster shared an image that looks like the product description page of the Phone (1). It contains a lot of marketing speak so we’ll break it down into simple words for you. 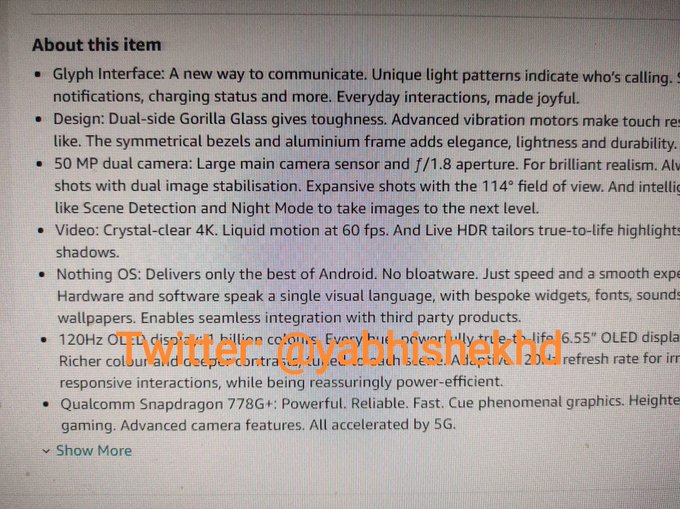 The 6.55-inch OLED display on the Nothing Phone (1) will enable a 120Hz adaptive refresh rate, according to the leak. Dual rear cameras with a 50-megapixel main sensor and an f/1.8 aperture will be found in the smartphone. According to the leak, the smartphone can capture 4K films at 60 frames per second. The phone will have symmetrical bezels and an aluminum frame.

The Snapdragon 778+ SoC, which Carl Pei himself has already acknowledged, is also mentioned in the leak. Although it almost has the same chipset as the SD 778, it has wireless and reverse charging capabilities. The smartphone would have dual-sided Gorilla glass protection, according to the report. View Full Spec Sheet

We already know that the Phone (1) will stand out from the rest of the Android pack thanks to "Glyph Interface" LED lights on the back. Based on Android 12, NothingOS is anticipated to run on the device. The UI of NothingOS is touted to be simple and elegant.

Nothing Phone (1) Price In Bangladesh

As previously announced, Nothing Phone (1) will debut on July 12 on an event which they named "Return to instinct". The cost of the smartphone has not yet been disclosed. The Price of Nothing Phone (1) in BD is expected to be under 45,000 BDT. In USA it is anticipated to cost less than $400.